If internet searches can serve as a kind of popularity contest, the banking institutions that have seen the sharpest surge of attention in the past five years aren’t the biggest U.S. banks. They’re the financial technology — or “fintech” — companies that became particularly appealing during the pandemic. Searches for digital banking features, such as mobile check deposits, also grew as U.S. banking habits shifted further away from in-person transactions.

Four popular fintech brands — Chime, Green Dot, PayPal’s Venmo and Square’s Cash App — have seen a surge in Google searches as they’ve gained a foothold in the banking industry, according to Google Trends, a tool offered by the internet giant that tracks the relative popularity of search terms over time.

About 4 in 5 Americans (79%) use mobile payment apps such as Venmo and Cash App, according to a February 2020 NerdWallet survey. Chime and Green Dot, meanwhile, have steadily built their customer bases, in part by serving Americans who have limited access to traditional banking services. They provide low-cost banking accounts with big ATM and cash reload networks. And their accounts serve as second chance banking options for people unable to open traditional bank accounts due to unpaid overdraft fees or other issues in the past.

The biggest collective spike in Google searches for the four fintech brands came the week of April 12, 2020. That period coincided with the first round of COVID-19 economic impact payments — aka “stimulus checks.” News coverage of Chime, Cash App and Venmo at the time highlighted changes to their offerings that made them more attractive options for receiving stimulus direct deposits instead of waiting for checks in the mail. 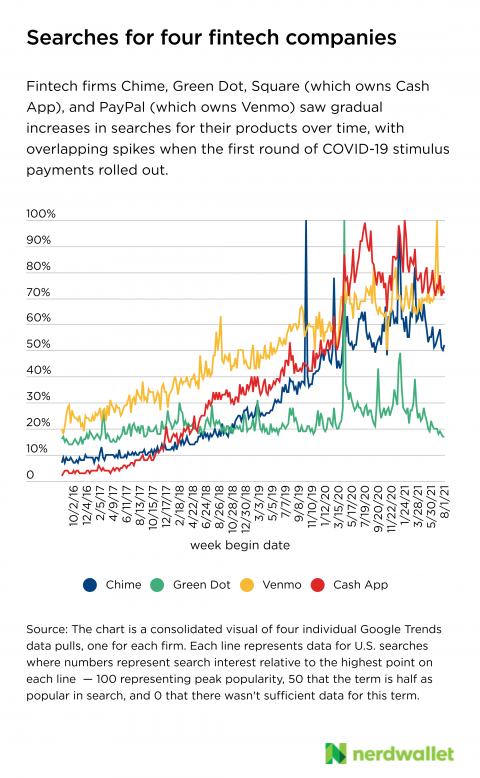 In mid-April 2020, Cash App and Venmo both added the ability to accept direct deposits so customers could have stimulus money sent straight to their accounts — especially important for those without bank accounts. Google searches that week for “cash app” went up by 32%, compared with the previous week; queries for “venmo” rose 12%. Both apps saw multiple jumps in searches throughout the pandemic.

Search volume for “chime,” the largest of the so-called neobanks, spiked by 46% that same week in mid-April, compared with the previous week. The company managed to make stimulus money available to hundreds of thousands of its checking account customers up to five days earlier than April 15, the date the U.S. Treasury sent stimulus funds to banks. Similar to how the company provides early access to direct-deposited paychecks, Chime credited the money to customer accounts before actually receiving it from the government.

Green Dot Corp. is more than a decade older than Chime and is known for mobile-focused bank accounts such as GoBank and GO2Bank, designed for low- to moderate-income Americans. It offers debit cards online and at thousands of U.S. retail locations, including Walmart stores. Similar to Chime, Green Dot accounts provide access to direct deposits up to two days early. In the second week of April 2020, Green Dot searches skyrocketed by 257%, reaching an all-time high in searches for the term “green dot.”

“Cash App, Venmo, Chime and Green Dot were able to grab the attention of folks looking for more accessible ways to manage their money,” Bessette says.

The four biggest U.S. banks — Chase, Bank of America, Wells Fargo and Citibank — hold a significant share of consumers’ money, with at least $1 trillion in assets each. Unsurprisingly, they also get far higher search traffic relative to newer banking players. But searches for these banks have steadily declined in the past five years.

Comparing each bank’s searches in the first week of August in 2016 and 2020, the term “chase bank” dropped by 23%; “bank of america” by 24%; “wells fargo” by 37%; and “citibank” by 44%. Those four institutions include the three largest networks of bank-owned branches, but the competition with newer banking companies is taking place primarily online as the prospect of cheaper, mobile-focused banking accounts becomes more attractive to consumers. 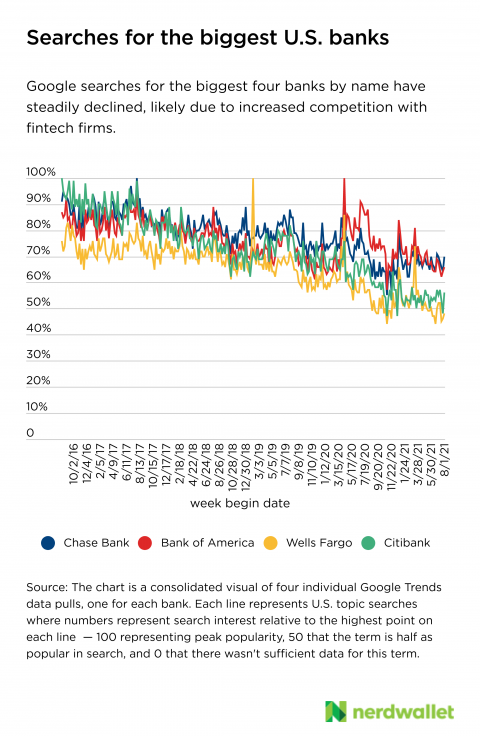 More than half of Americans, 52%, said they had visited bank branches less often since the pandemic started, according to a February 2021 study by NerdWallet and Marcus by Goldman Sachs. And a third of Americans have either tried or increased their usage of digital banking services, such as mobile check deposits or online bill pay. But behavioral shifts toward digital banking started years before the pandemic. 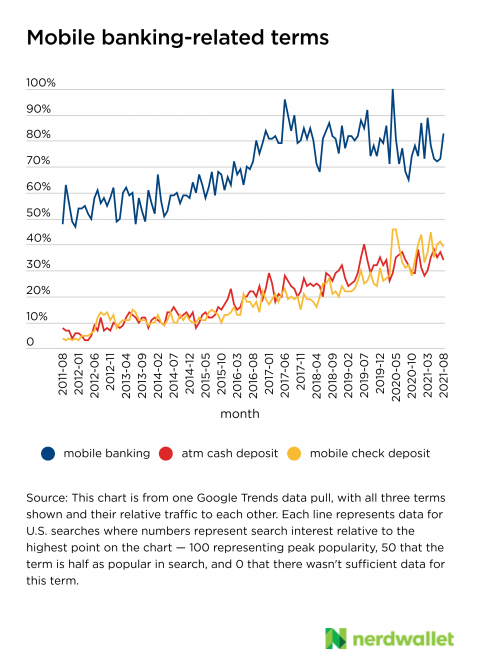 The gradual increase in search interest for the terms “mobile check deposit” and “atm cash deposit” may relate to more people moving their banking online, including opting for online-only institutions. Bank branches have long been the places to cash checks and deposit cash, but as more online-only institutions, especially upstarts such as Chime, come onto the scene, finding workarounds for dealing with cash and checks can require some research.

The pandemic, and especially the stimulus payments that resulted, contributed to several spikes in search terms around banking institutions and services that focus on getting fast or easy access to money. Chime, Green Dot’s GoBank, Cash App and Venmo all offer access to direct deposits days earlier than many traditional banks, which can be a big deal for anyone living in financial uncertainty or distress.

“Interest in mobile banking and mobile-first financial providers was bound to increase over time,” Bessette says. “The pandemic just encouraged people to reevaluate their money management much faster than they otherwise might have.”

UTAH (ABC4) – If you've driven downtown recently you've seen the construction. The work needs to be done, but it can have an impact on local businesses caught in the rubble.

There is help for those businesses though and the Salt Lake City Council has allocated money to help businesses thrive while construction is happening.

BOSTON (NEXSTAR) — A group of high school students in Massachusetts had to ride on a party bus complete with a stripper pole and neon lights during a recent field trip — an experience their teacher said highlights problems with the education system.

Jim Mayers, an 11th-grade Advanced Placement language and composition teacher at the Brooke Charter School in Boston, said in the since-deleted tweet that the original charter bus had fallen through, Masslive.com reported Monday.

Hazy skies and dry as warming trend continues into the weekend

SALT LAKE CITY (ABC4)- Happy Thursday Utah, we're almost to the weekend! We continue our stretch of warm and dry weather with some smoke plumes working their way in.

The smoke is still filtering in from California but should not get too bad as a quick-moving system will move in and help reestablish a northerly flow that will help dissipate the smoke.

Community connects through Gabby Petito’s story at a candlelight vigil

Will Chad Daybell and Lori Vallow stand trial together?

Gov. not happy with rapid tests but Utah has plenty according to Department of Health

Dive team called in to assist with search for Brian Laundrie

Gov. not happy with rapid tests but Utah has plenty according to Department of Health

First Presidency calls for masks in temples amid COVID-19 resurgence