The third-quarter housing market was, yet again, unfriendly to first-time buyers. High mortgage rates moderated any relief from the high prices and scant listings that have dominated the past few years.

The good: The number of homes on the market increased, moving in a direction that makes it less dispiriting to browse a real estate listing app. Also, price growth slowed and even reversed in some markets.

The bad: Mortgage rates soared and are likely to move higher, eating away at the benefits of any price moderation for buyers who have to finance their purchase. And most buyers do.

Homes became slightly more affordable in the third quarter — across the nation as well as the most populous metro areas. This is largely thanks to prices stalling and in some cases dropping a bit.

Homes were listed at 5.7 times first-time buyer income across the nation and the biggest metro areas, on average. Though better than last quarter, this rate is still far above the 3-times-income benchmark that has been historically used to gauge affordability.

The most affordable and least affordable metros remain largely in two distinct regions: the Rust Belt and West Coast, respectively.

Places where homes were furthest out of reach include Los Angeles, where homes were listed at 11 times first-time buyer income, and San Diego (9.2), Miami (8.8), San Jose, California (8.6) and San Francisco (7.6).

Click here to see a table with affordability metrics for all locations analyzed.

First-time buyer guidance: Home prices may come down where you live, but home prices are only one part of the affordability equation. Inflation is eating into your budget, unless your income has been growing at a pretty healthy clip over the past year. Adding increased mortgage rates to this soup of numbers can strain affordability despite lower prices. When determining whether now is a good time to buy, keep all of these elements in mind.

List prices are still higher than a year ago, but they have stalled across most metro areas and the nation as a whole when compared with last quarter. In some areas, they’ve even fallen. This is good news for buyers — things are moving in the right direction — but those prices climbed so far in the past few years that it’ll take more than a plateau or gentle dip to alleviate affordability problems.

Nationwide, list prices fell 2% quarter over quarter while maintaining a 6% edge compared with Q3 2021, after adjusting for inflation. In the largest metros, list prices came down 2% on the quarter and rose 3% on the year.

Click here for a table with pricing changes across all metros analyzed.

First-time buyer guidance: Lower home purchase prices can offset interest rate hikes to some extent, but that can also work the other way. It takes a careful eye to balance the two ever-changing numbers to arrive at a comfortable monthly payment. Shop around for mortgage lenders by getting preapproved, and compare their rates. Then, pin down a mortgage rate once your home loan is approved by asking your lender for a mortgage rate lock. In this environment, rate changes with hundreds of dollars in monthly impact can happen quickly. Locking a rate provides some peace of mind that even if rates rise, you’ll still be able to afford the mortgage at closing.

The number of homes available for sale rose 50% from last quarter across the country. In fact, not a single metro area of the 50 we examined saw a decline in listings quarter over quarter. Overall, listings rose 59%, on average. And many of the most significant gains were seen in the markets that needed them the most.

The metros with the biggest inventory gains were some of the same that made headlines in previous quarters for suffering through alarming shortages. So while they are experiencing increased listings, there is still a deficit.

For example, list counts more than doubled in Raleigh last quarter to about 3,250. But there are still 36% fewer listings now than there were in the third quarter of 2019, when there were 5,090, on average. 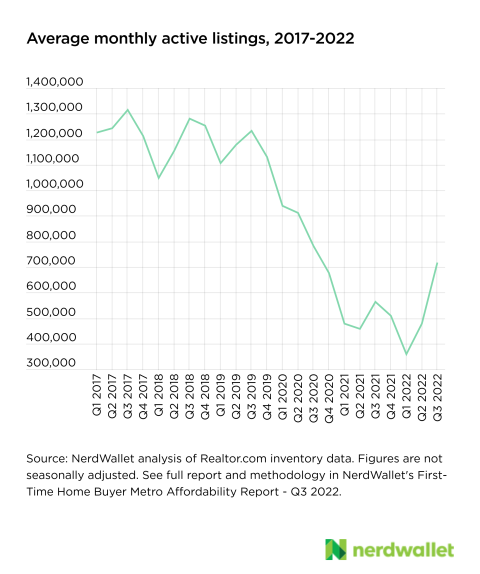 Click here for a table of inventory changes across all metros analyzed.

First-time buyer guidance: Competition is down because there are more listings and some would-be buyers are sitting out the higher mortgage rates. How much these issues work in your favor depends largely on where you’re shopping for a home and how that market has been affected over the past few years. Get to know the specifics in your market. An agent can help with this, but so can spending time browsing and comparing listings — both will help you set realistic expectations of the conditions you’ll find in your area.

The role of rates

For the past few years, amid a wildly competitive and costly homebuying market, prices and inventory were the biggest issues. Savvy buyers could take advantage of historically low mortgage rates. Now, however, mortgage rates are not only a consideration, but they’re also a potential obstacle.

Most buyers don’t have a fully flexible budget; they can’t absorb an additional $500 each month, for example. The first step is to borrow less, either by looking at less costly homes or making a larger down payment. In this way, seemingly small increases in rates can significantly change the type of home you end up owning or how long it takes you to have those keys in hand. If you’re unwilling or unable to make these sacrifices, it may not be your time to buy. The housing market doesn’t change quickly, but it does change. So postponing a homebuying decision now doesn’t have to mean giving up on the dream of homeownership.

Analysis methodology and additional data available in the original article, published at NerdWallet.

Why the US waited to shoot down the China balloon

One hospitalized after falling through ice at Pineview …

Why the US waited to shoot down the China balloon

One hospitalized after falling through ice at Pineview …

US Shoots Down Chinese Balloon Down Ending Speculation

Search redirected after no signs of missing man in …

Get married or get a mortgage? Cities where a wedding …

Search redirected after no signs of missing man in …