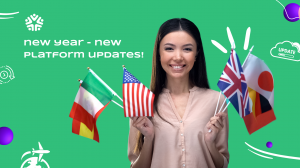 The first decentralized fundraising platform UFANDAO continues to grow internationally and has launched six more languages on the platform.

Our mission is to empower people to unite around the needs that matter and fulfill their wishes without any restrictions towards age, gender, race or religion. ”
— Oleg Rodionov, the CEO of UFANDAO
TALLINN , ESTONIA, January 24, 2023 /EINPresswire.com/ -- UFANDAO - is fundraising without boundaries. Its goal is to create an international community of like-minded people building mutual support for each other's dreams and needs. People can fundraise for what matters to them, create as many dream campaigns as they need, and get unlimited donations from all over the world.

“Our mission is to empower people to unite around the needs that matter and fulfill their wishes without any restrictions towards age, gender, race or religion. UFANDAO offers each subscriber a wide range of opportunities to fulfill any dream”, says Oleg Rodionov, CEO at UFANDAO.

Earlier, the platform introduced a built-in translation for all dream campaigns on the website, that removes the language barriers between the users.

About UFANDAO
UFANDAO is a next-generation decentralized fundraising platform aimed to fulfill financial needs and dreams of its members. It was launched by a team of passionate people who believe in the idea of fair and decentralized fundraising. In response to that, UFANDAO provides its members the ability to create time-boundless fundraising campaigns that are free, peer-to-peer, secure and decentralized. UFANDAO is an officially registered organization that has all the necessary licenses and documents in accordance with European legislation. The company's documentation is publicly available on the website.

Raise funds for any cause with UFANDAO! Easy, Fast and Powerful way to finance your dream!