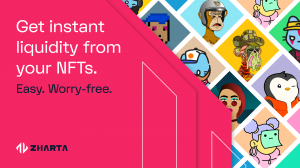 This development comes after a successful audit by Hacken and close on the heels of a $4.3 M seed round.

NFT financialization is a space that has seen explosive growth month after month, but it is far from reaching its full potential.Currently, its primitive infrastructure still needs to be expanded(...)”
— Nuno Cortesão, CEO
LISBON, PORTUGAL, January 24, 2023 /EINPresswire.com/ -- Zharta is excited to announce the official launch of its NFT-backed lending protocol. This development comes after a successful audit by Hacken and close on the heels of a $4.3 M seed round. Zharta’s protocol boasts instant, permissionless loans delivered via a simple and intuitive UX, liquidation protection during each loan’s entire term, flexible pricing with a pay-what-you-use mechanic, and a bundling feature that allows the use of multiple NFTs for the same loan, paired with an automated selection option for those unsure of what collateral to use.

Zharta’s seed round happened just last year, with the contributions of Greenfield One, VCs Shilling Capital and Possible Ventures, SpaceShipDao, UniwhalesDao, Clever, Olisipo Way, and other Business Angels. Now, the lending protocol is ready for its official launch.

With its simple, clean-but-colorful UI, Zharta’s platform would be easy to spot in a line-up. It was designed to be user-friendly and accessible to anyone, regardless of their level of experience with NFTs or lending protocols - a mentality that can be felt not only in the platform's appearance but also in the rules embedded into smart contracts.

Its termed loan contracts are a good example of this. They do not allow liquidations before the due date, a feature that can benefit both beginners and experienced users, as it eliminates the need for borrowers to worry about market volatility causing them to lose their NFTs despite their intention and ability to repay their loans on time. This is especially crucial in a market subject to so much volatility, and a valuable feature for anyone who values peace of mind.

Zharta’s protocol uses a Peer-to-Pool design, which allows users to instantly and securely borrow liquidity using their NFTs as collateral or, conversely, to provide liquidity to earn a passive income. There are a number of systems in place to ensure a “liquidity crisis” doesn’t occur - one of which includes the collaboration of Zharta’s new partner, NFTX, whose AMM protocol will serve as a last-resort mechanism for liquidating defaulted assets, thus ensuring that liquidity will make its way back to the pool.

Another feature Zharta is introducing is bundling - the ability to use more than one NFT from one or more collections as collateral for a single loan. This should prove especially helpful for collectors whose assets tend to have lower individual values.

This innovative protocol has been live on a soft rollout for the past months, during which time the team gathered feedback from users. These insights proved invaluable and led to several enhancements to the protocol to ensure a seamless user experience.

Zharta’s team believes these features, along with the convenience of instant, permissionless loans, should cater to borrower needs that the market had hitherto not adequately met.

"We are thrilled to bring Zharta to the market," said Nuno Cortesão, co-founder and CEO of Zharta. "NFT financialization is a space that has seen explosive growth month after month, but it is far from reaching its full potential. Currently, its primitive infrastructure still needs to be expanded. We believe borrowers will appreciate our user-centric obsession with simplifying the loan process while ensuring top market rates - not to mention the features we have been working on daily with guidance from our community, which we will release in the coming weeks!".

To celebrate the launch, Zharta will be hosting NFT giveaways on Twitter.