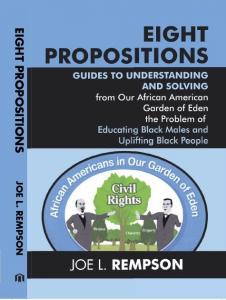 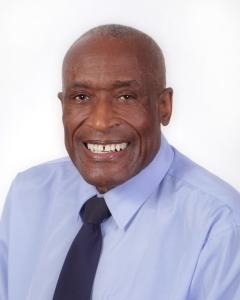 Contends that Only We Black Males Can Do It

Rather than blaming racism, he traces those problems back to what he terms the African American Garden of Eden. In it, W. E. B. Dubois outlasted Booker T. Washington and fathered a tradition which Rempson, a Bookerite, argues has produced a victim identity and an emphasis on the system rather than the self.

Rempson declares that only black males offer a way out because it is entirely “our black males who are keeping us down and curtailing our progress,” in contrast to black females, who “are doing OK.”

Black males are plagued by what Rempson calls the African American Male School Adaptability Crisis (AMSAC). Their academic performance ranks at the bottom, alone, below black female students and below white, Asian, and Hispanic male students. In large urban areas, their high school dropout rate is 59 percent and, nationally, they lag behind in college attendance and graduation rates. The outcome, Rempson argues, is dysfunctionality and the existence of hedonistic norms which hinder family and community stability.

Rempson’s position is based on an analysis of extensive data and perspectives from various disciplines and sources. That analysis yielded what he concludes are the real causes of the black plight and, thus, made possible the formulation of real remedies. In his eight propositions, he synthesizes what they are, and he further lays out an overall blueprint.

In entirety, the book is a lengthy 20 chapters, but, from the first and last chapters, one can get his message, reading the rest selectively.

Of interest to some, for example, might be his proposed evidence-based African American Male Career Pathway Program, his ideas for Art of Loving (AOL) schools and a Child Family Rights Movement, or his discussion of former President Barak Obama support of a black victim identity.

Of interest to others, for example, might be his treatment of such topics as black intelligent quotient (IQ), black culture, “acting white”, racism, police misconduct, Black Lives Matter, or critical race theory.

Throughout, Rempson’s conviction is that unless blacks confront their realities, “we will not solve our problems.” “Nor,” he continues, “can we solve them unless we cut the umbilical cord to white America. We have no right to expect it to be our savior; nor are we justified in perceiving it as our oppressor.”

Rempson’s forcefully and finely written book is a singular and courageous contribution. Alone, his eight propositions make it a worthy read.

“Rempson, the former dean of students at the City University of New York’s Bronx Community College, is a lucid writer… it’s clear that the author has spent many years thinking about the particular problems of the community and formulating customized solutions to help solve them, as embodied here… A lengthy manifesto for AMCAP that lays out a vision for an ascendant black America.” -- Kirkus Review, original edition

“Rempson describes himself simply as an educator, and while some of his arguments are not revelations, others are. For example, he provides a unique angle on Dr. King’s attitude on self-reliance, and draws an interesting connection between King and Washington that many would consider startling…Rempson writes from the heart, but with purpose and clarity…is a fresh voice that deserves to be heard…At more than 900 pages, this book is initially daunting. But the narrative is so tidily laid out that, in the end, none of the content seems superfluous.” --Blueink Review, original edition

“Rempson powerfully advocates for applying the energy of the civil rights movement to the black family… book is surprising, with prose that can get fiery, and some may find the candor with which he approaches his topics offensive. He outlines a program to help black male children build a strong identity based on their personhood, rather than on the ‘cool culture’ of the street and the peer group, and calls black males to strong, responsible fatherhood.” --Foreword Clarion Review, original edition